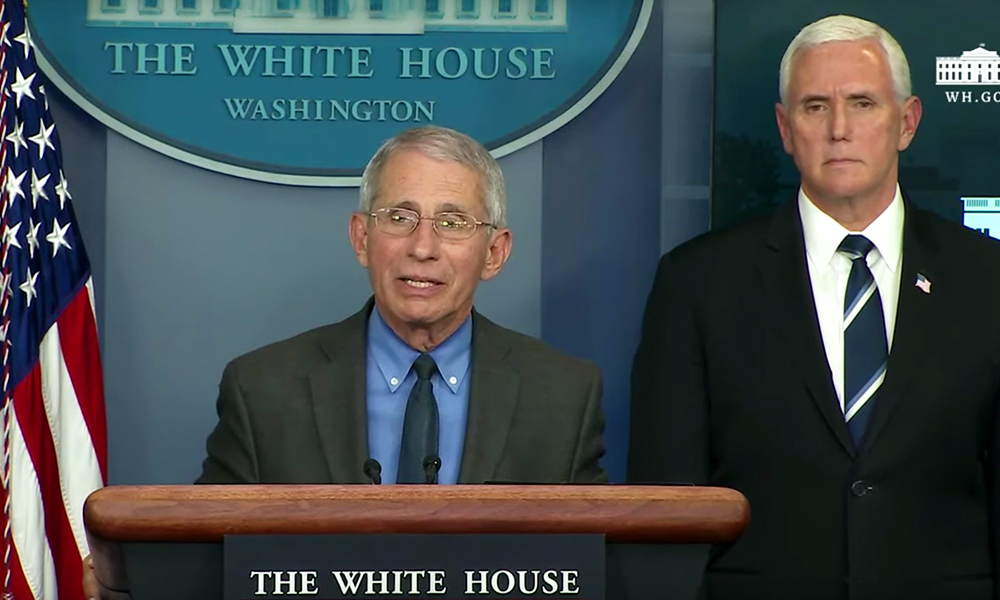 If you have a hard time watching The White House press briefings, you’re not alone. It’s getting harder and harder to stomach some of the rhetoric coming from that podium, but every once in a while something rings true.

That much and more can certainly be said for Dr. Anthony Fauci’s recent comments. Fauci, one of the most prominent members of the White House Coronavirus Task Force, took a powerful moment to acknowledge the “incredible courage and dignity and strength and activism” LGBTQ people showed during the HIV epidemic. He said this as Mike Pence, whose record on LGBTQ issues speaks for itself, stood behind him.

In a clip that is better seen than described, Fauci outlines how we expect this pandemic to disproportionately affect disadvantaged communities, particularly black Americans. The numbers in Michigan are already troubling, with black Americans representing 35% of all cases of infection and 40% of all deaths. This is despite the fact that they make up around 14% of Michigan’s population. There are a multitude of factors at play here, but given this obvious health disparity, Fauci was reminded of the “greater proportion of [his] professional career,” which was defined by HIV.

Fauci went on to say that “when you’re in the middle of a crisis like we are now with the coronavirus, it really does […] shine a very bright light on some of the real weaknesses and foibles in our society.” Fauci ultimately resolved that “when all this is over” there will still be health disparities we need to address.

In typical Pence fashion, he quietly listened on as Fauci made this comparison. As you may know, Pence’s record when it comes to HIV, and how it relates to the LGBTQ community isn’t exactly clean. Many argue that his actions as a congressman, governor, and as vice president, have only added to the already crushing stigma.

When Fauci finished, Pence stepped up to the podium saying “well said,” in response. It’s safe to say that the vice president is not quite as brazen as the president, but instead of allowing this two-word response to speak for him, let’s look to his actions.

In his bid for Congress in 2000, Pence ran on on a platform that called on lawmakers to “oppose any effort to put gay and lesbian relationships on an equal legal status with heterosexual marriage,” to “oppose any effort to recognize homosexuals as a ‘ and insular minority’ entitled to the protection of anti-discrimination laws similar to those extended to women and ethnic minorities,” and to “support the reauthorization of the Ryan White Care Act only after completion of an audit to ensure that federal dollars were no longer being given to organizations that celebrate and encourage the types of behaviors that facilitate the spreading of the HIV virus.” Pence called on these federal dollars to instead be “directed toward those institutions which provide assistance to those seeking to change their sexual behavior.”

In 2009, Pence signed on to a letter demanding federal appointee Kevin Jennings be fired because of his “role in promoting homosexuality and pushing a pro-homosexual agenda in America’s schools — an agenda that runs counter to the values that many parents desire to instill in their children.”

As vice president Pence delivered a keynote address at the notoriously anti-LGBTQ organization, Focus on the Family. Their founder, James Dobson once wrote that it was important to raise boys to be heterosexual to avoid “exposure to sexually transmitted diseases such as AIDS and tuberculosis, and even a shorter lifespan.”

The list goes on and on, especially if you take into account the actions of the administration he belongs to.

As polite as he may be, actions speak louder than words, and Pence has yet to take any measurable action that would lead us to believe he has changed his position on LGBTQ rights. In the meantime, it sure is satisfying to watch him quietly look on as Fauci speaks some sense in a senseless time.

You’d be forgiven if you forgot that something similar happened last year as openly gay Taoiseach of Ireland (similar to a prime minister) Leo Varadkar spoke at The White House on St. Patrick’s Day. “I stand here as the leader of my country. Flawed and human, but judged by my political actions, not by my sexual orientation, my skin tone, gender, or religious beliefs.” Again, all while Vice President Pence looked on.