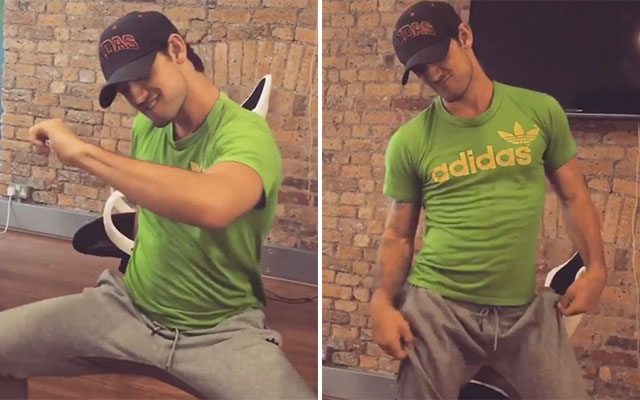 Alex Pettyfer hasn’t been caught gyrating since Magic Mike hit the big screen on June 29, 2012. But, four days ago, that changed when Pettyfer posted a video of himself grinding his hips to Instagram. The 26-year-old hunk captioned the 1-minute clip “When you’re working late at night, and your team decides to bring up the past!!! #magicmike #whatwouldyouhype #imissthosedays #littlerusty @hypit”.

Although Pettyfer didn’t appear in Magic Mike XXL (2015), this clip confirms he can bust a move (or a nut) with the best of them. Apparently, Pettyfer is preparing for a role in a top-secret movie, and he’s got the abs to prove it. With a body like that, we hope the Beastly star finds his way back to the silver screen and out of his sweatpants ASAP.

In a recent interview with Bret Easton Ellis on his podcast, Pettyfer explained why he and Channing Tatum don’t get along. When asked about the rumors, Pettyfer simply said, “It’s true.”

“… Channing Tatum does not like me — and for many reasons [and] many being my own fault,” he clarified. Apparently, Tatum was unsure about casting Pettyfer because of his “bad boy” reputation in Hollywood.

Pettyfer clarified and described his experience on set saying, “I was scared to speak. I actually did my work and I sat in the corner and listened to music because I had been told anything I did was wrong by my reps. I was very insecure as a human being. That also gave me a bad rep because everyone was like, ‘Alex doesn’t speak because he thinks he’s better than everyone else.’ That’s not true. I was just generally nervous and scared to be myself. I was in character.”

@AlexPettyfer definitely still has it! ?

Pettyfer is young and relatively low on the Hollywood totem pole. However, he seems to be catching on to the rules of tinsel town. On the Tatum’s star power, Pettyfer says, “What Channing says goes. He’s a movie star. I made the poor decisions.”