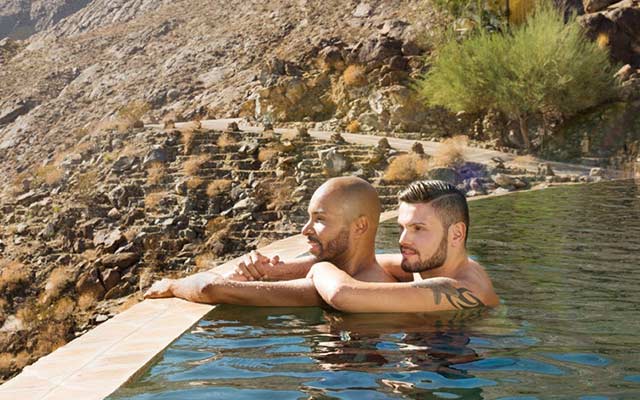 We at Gayety LOVE Palm Springs (who doesn’t?). The sunshine, the pools, the parties, the drag! When you’re in Palm Springs, it’s like being in gay heaven with no reason to leave.

We love it so much we reached out to the renowned Palm Springs Social Ambassador and Hostess with the Mostest, Bella da Ball, to dish on what’s hot, what’s not, and to learn a sexy thing or two about our favorite gay oasis. 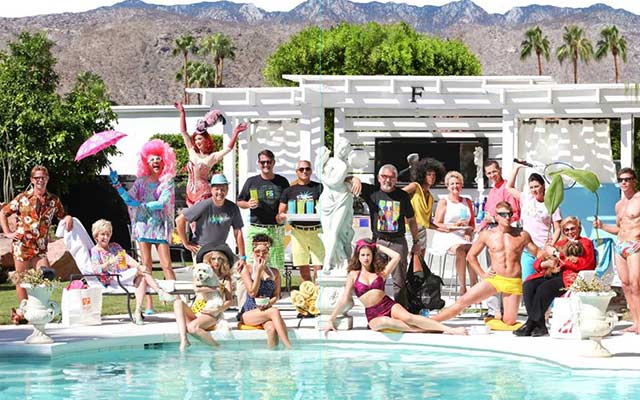 Bella da Ball recently received a star on the Palm Springs Walk of Stars, as well as a Desert Outlook Best of the Valley’s Ultimate Pride Drag Personality. She knows what she’s talking about, y’all! Together, we compiled a list of everything you should know about Palm Springs.

1. More Drag Queens per capita than any other city.

You can find some form of drag entertainment every day at any time. They perform in clubs, restaurants and theatres, which offer the colorful “girls.” Oscar’s, Ace Hotel, Purple Room, Rio Azul, AJ’s, Toucan’s, Playoffs, Hunter’s, and Georgie’s Alibi Azul are among the best venues for drag queen entertainment.

You might spot some of the “girls” out and about for dinners and charity events, or hosting bingo fundraisers and bachelorette parties. One might say Palm Springs is where drag queens are made, then shipped off to the rest of the world in style. According to VisitPalmSprings.com, the city has one of the highest concentrations of gay and lesbian resorts in the world, so the abundance of drag queens is totally understandable.

2. Modernism Week is the SHIT.

One of the sexiest things about Palm Springs is its architecture. Modernism Week is celebrated officially in February and October, but it’s evident throughout the year in the homes and buildings influenced by the era. Many of the shops, like Wonderama, Just Fabulous or Destination PSP, carry vintage treasures from the not so distant past, too!

Palm Springs is alive and partying year round. Even though the temperature can climb into the 100s, the city never closes up shop.

Things are buzzing year round, and if you need to get away for a few hours, Palm Springs is a short drive or flight from Las Vegas, Phoenix, San Diego and Los Angeles.

The events are continuous as well: The Festival of Lights holiday parade, which is the 1st Saturday in December; Palm Springs International Film Festival in January; Hollywood in Palm Springs; Short Fest in June; Gay Pride in November; Dinah Shore, a lesbian and golf party weekend; and the White Party in April (just to name a few).

Liberace owned an opulent Palm Springs seven-bedroom, 8,000 square-foot mansion called “Casa de la Cloisters,” which was rumored to be the site of numerous gay sex parties — even though Liberace’s own mother lived in an adjoining back property.

It’s rumored such stars as Rock Hudson and Merv Griffin attended. Up until recently, a large outdoor candelabra and a cursive “L” on the gates could be seen outside the property.

5. Rock Hudson came out to this community first.

Palm Springs was a place where Rock Hudson virtually lived an openly gay lifestyle, free of the Hollywood vultures peering into his bedroom every night. He also threw immaculate gay parties while living with two of his long-term lovers.

One of his good friends was former Palm Springs mayor and Hollywood actor, Charles Farrell, who was also known to be bisexual or gay. Farrell owned Racquet Club hotel, which was also known to host numerous gay parties attended by Hollywood’s finest.

6. Palm Springs was one of the first “Gayborhoods.”

According to the book A City Comes Out by David Wallace, a lesbian named Florilla White purchased and ran the Palm Springs Hotel, one of the first lodgings in the area. For a while, she also the city’s resident medical doctor, and also happened to be in a relationship with art collector Rose Dougan throughout the 1940s.

Her patients knew she was gay and didn’t care all that much, especially after she started hosting Hollywood stars, like bisexual silent screen star Rudolph Valentine, at the hotel. Over time, the Palm Springs Hotel turned into more than just an LGBT getaway. It reached the entire city, and it’s all thanks to Florilla White and her two sisters, who essentially helped settle this desert oasis.

In the 1930s to 1950s, actors were controlled by film executives. Most contracts stipulated that they could not travel more than 200 miles from Los Angeles during production, which is why Palm Springs became a nearby getaway for celebrities. Without paparazzi or studio handlers, most homes were surrounded by high walls and fences, which allowed LGBT residents total privacy.