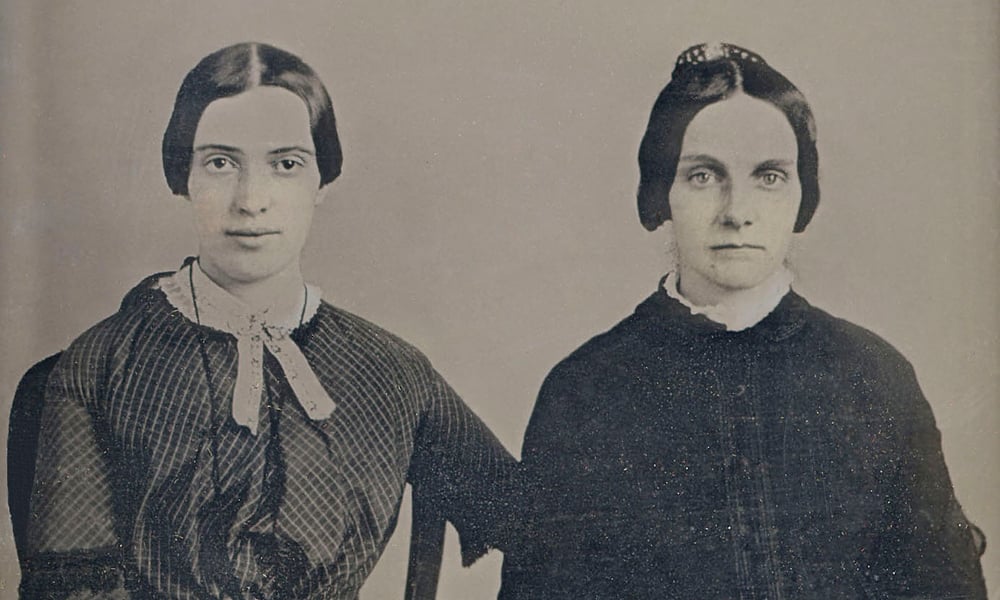 Although LGBTQ people have existed since time immemorial, history has had a long, well, history of straightwashing key figures. Back when queerness was widely considered taboo, many would hide any evidence of their queerness out of fear of persecution. As such, it’s often difficult to confirm just how prevalent queerness was in the past. The same goes for whether some of the most notable names in art, literature, science, and politics were queer themselves.

Emily Dickinson, a prolific poet is often remembered as the eccentric shut-in who never married. She has also long been rumored to be among those historical figures whose queer identity may have been deliberately erased. Here, we take a brief look at the life and work of Emily Dickinson. We also find out whether there was more to this poet than meets the eye.

Was she really as reclusive and eccentric as she was made out to be? Was Emily Dickinson gay? Find out below.

Who Is Emily Dickinson?

Emily Dickinson was an American poet born into a prominent family in Amherst, Massachusetts in 1830. She was a prolific writer, and wrote nearly 1800 poems in her lifetime. Despite this, she only published 10 poems while she was alive.

After her death and the subsequent publication of her manuscripts, Dickinson became known as one of the greatest American poets of all time. The Poetry Foundation describes Dickinson’s work as challenging “the existing definitions of poetry and the poet’s work” and compares her to the likes of Walt Whitman and Henry David Thoreau for experimenting with expression “in order to free it from conventional restraints”.

So, what makes fans and scholars think that Dickinson may have been gay? Here’s some of the evidence we’ve gathered:

Although there isn’t a lot of hard evidence that confirms Dickinson’s sexual orientation, those who study her work believe that several surviving letters written to Susan Gilbert Dickinson may suggest that she wasn’t straight.

Dickinson and Gilbert were incredibly close for most of their lives. They met when they were 19 and became best friends and eventually sisters-in-law. They wrote many letters to each other, particularly when Gilbert had to go away to Baltimore for 10 months to take up a teaching job.

A Letter to Susan

In one of her letters to Susan, Emily writes:

“Susie, forgive me Darling, for every word I say — my heart is full of you, none other than you is in my thoughts, yet when I seek to say to you something not for the world, words fail me. If you were here — and Oh that you were, my Susie, we need not talk at all, our eyes would whisper for us, and your hand fast in mine, we would not ask for language — I try to bring you nearer, I chase the weeks away till they are quite departed, and fancy you have come, and I am on my way through the green lane to meet you, and my heart goes scampering so, that I have much ado to bring it back again, and learn it to be patient, till that dear Susie comes.”

Seeking help to publish the poet’s remaining works after her death, Dickinson’s sister Lavinia approached Gilbert and later Mabel Loomis Todd, a woman who was also romantically involved with Susan’s husband, Austin Dickinson, at the time.

This, says the Emily Dickinson Museum, was a “momentous choice” for Lavinia. As Dickinsonian scholars would later find, given Todd’s involvement with Austin and her disdain for Susan, it was very well possible that Todd omitted and overwrote many crucial words from Emily Dickinson’s work – much of which detailed her rich inner life and her relationship with Susan.

A post shared by Wild Nights With Emily (@wildnightswithemily)

How TV And Film Bring The Dickinson-Gilbert Relationship To Light

Madeleine Olnek’s 2019 film Wild Nights With Emily explores the complicated family feud between the Dickinsons and the Todds, as well as Emily’s close relationship with Susan Gilbert.

Speaking to Montecristo magazine about her frustration over the blowback she received from critics over her portrayal of Dickinson as a lesbian, Olnek said she wrote a 30-page document detailing the evidence she found that Dickinson’s portrayal as a recluse that barely had any relationships (let alone queer ones) stemmed from both the Todd-Gilbert beef and attempts to protect her work from McCarthyism.

To understand the latter issue, remember that the 1950s were a time of heightened paranoia against anyone who might attempt to betray the American government to perceived communist threats. This paranoia, inspired by Senator Joseph McCarthy, led to the persecution of suspected “deviants”, including activists and LGBTQ people. Around that time, a book revealing more information about the poet, her work, and her alleged affairs with women had been published – and was perceived to be a threat to the beloved poet’s reputation.

“People were afraid Emily Dickinson was going to stop being taught in schools,” said Olnek. “They were afraid her legacy was going to be ruined and that people weren’t going to read her anymore. And it could be argued a lot of those same reasons are still as relevant today.”

Apple TV’s 2019 comedy-drama series Dickinson, on the other hand, is written as a coming-of-age story that explores Emily’s struggles with the constraints of being a woman poet during her time, familial expectations, and her burgeoning romance with Gilbert. The series is a modern, fictionalized retelling of Dickinson’s life and takes creative liberty to portray a tender and relatable romance between her and Gilbert.

The Photo With Kate Scott Turner

One of the most recent pieces of evidence that point to Dickinson’s apparent queerness is a daguerreotype photo that is believed to feature the poet and a woman named Kate Scott Turner. It was taken around 1859 when the poet was about 30 years old. The photo surfaced after an anonymous collector brought it to Amherst College to be analyzed. The head of the archive and special collections Mike Kelly spoke to the Associated Press about the photo. He said that he’s “certain that the subjects in the daguerreotype are Dickinson and Turner”.

But what makes a photo of Dickinson next to this woman so interesting? As it turns out, after meeting and spending some time with Dickinson, Turner reportedly moved to Europe. There she lived as openly gay. This is believed to be what started rumors about the two in the first place. The discovery of the photo merely appears to confirm them.

The photo is also referenced in a scene in Olnek’s film. In an interview with Vox, Olnek says their relationship is “a lot harder to deny now,” because of this photo. “Like, there’s a picture. It’s a lot harder.”

So, Was Emily Dickinson A Lesbian?

While it’s difficult to say whether Dickinson was gay for sure, there is a lot we do know. She has had more than one “close” relationship with women throughout her lifetime. Despite attempts to stamp out these details, recent evidence tells us she wasn’t as straight as some historians suggest. Thanks to shows like Wild Nights With Emily and Dickinson, we can begin to imagine what Dickinson’s life might have actually been like.

RELATED: Everything You Should Know About Ancient ‘Romosexuality’