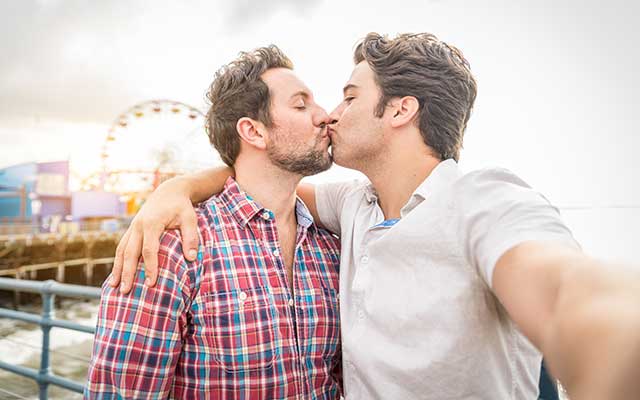 New research is showing what we all secretly knew (but weren’t sure about). Americans are having more gay sex, and they are ok with it. Thank you, baby Jesus!

Research led by San Diego University analyzed data from the General Social Survey, collecting annual information from 30,000 adults about sexual behaviors and attitudes. It turns out, people who reported having had same-sex sex doubled between 1990 and 2014.

Men who have had gay sex rose from 4.5 percent to 8.2 percent. Individuals who have had sex with only one gender stayed roughly the same, but the surprising part was in regards to people who reported having sexual encounters with both genders, i.e. the bisexual clan. That number rose from 3.1 percent to 7.7 percent. If it were not for bi-curiosity, sexual experimentation would have been stifled.

The findings were published in the journal Archive of Sexual Behavior, but before we jump to conclusions and assume this means America is becoming more open-minded, researchers also found that 51 percent of U.S. citizens still think there’s something “wrong” with gay and lesbian sex.

“What this study appears to indicate is that people are increasingly feeling more able to be open about their sexual orientation,” Kim Sanders, spokesperson for the LGBT charity Stoneway, said to Broadly. “Historically lesbian, gay and bi people have been a hidden population because people were extremely reluctant to speak openly about their sexual orientation for fear of discrimination, violence or ridicule. This study seems to show that attitudes are changing, and people are beginning to feel free to be themselves which is very positive news.”

While sexual fluidity is more accessible now due to digital apps promoting anonymity, it does not mean men are becoming gay or bisexual, but rather more open to experimentation.

Related: Straight Men Touch a Peen for the First Time

“These trends are another piece of evidence that American culture has become more individualistic and more focused on the self and equality,” Jean Twenge, professor of psychology at San Diego State University said in a statement. “Without the strict social rules common in the past, Americans now feel more free to have sexual experiences they desire.”

The study showed that age had little impact on a man’s propensity to have gay sex, while women are more inclined to have it while they are younger (usually between ages 22 and 28).

In another research study investigating numbers all the way back to 1973, researchers found that the percentage of adults who believed that same-sex activity was “not wrong at all” jumped from 11 percent in 1973 and 13 percent in 1990 to 49 percent in 2014 — a huge leap!

The enormous cultural change (primarily due to television and other pop culture bridges) created an after-effect for young adults in the form of sex. The freedom to express one’s self through sex is ƒa lot more open because of cultural shifts. Does this mean the more open we are as a nation, the gayest sex we have? If it does, sign me up for the next community rally!