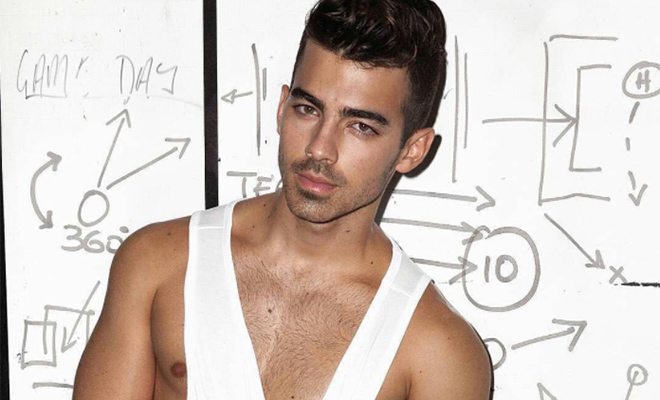 In a recent interview with PrideSource, Joe Jonas talked about his openness to playing gay roles. The 27-year-old actor also discussed his gay celebrity crush(es). he says, “I’d say for sure Daniel Craig. I think Matthew McConaughey is a hunk of a man. I’d have to go with George Clooney. Older, mature men.”

Related: Nick Jonas Comes Out as Gay (On Kingdom)

“I don’t have an issue with it. I think it’s a compliment,” Jonas said. “I have a lot of gay fans. It’s not like it bothers me. Some people handle it differently, but at the end of the day, I’m cool with it and think it’s kind of funny. You have to learn to laugh; people are gonna create a story out of anything… It’s probably because I’m in touch with my feminine side. Look, I love fashion; I love to dress well. I love certain things like that. And I have a lot of gay friends, as well, so that could probably point them in that direction. But again, the gay community is something that is close to my heart, so I don’t mind. Hey, if they wanna think I’m gay, it’s fun.”

Has your beefier body gotten you more attention from gay men?

I think so! Probably, yeah. I’m seeing it just through DMs. It’s quite funny. But I take it as a compliment. It’s cool. At the end of the day, for me, it goes back to the music, and DNCE has done a lot of cool concerts, like Pride shows. We have a lot of gay fans, and we love that they’re so supportive, so hey, if that makes them happy, it’s all good.

What do gay men DM you?

I bet you could take a wild guess. (Laughs) It’s all over the map, from selfies to you-know-what. It’s funny, too, because you can’t really tell what people are sending because everything now is blurred out, and I like to read some of the DMs and hear stories. But, of course, sometimes there are crazy ones, and it’s just straight nudity. You have to just find something good in it — or laugh, depending on what it is.

Why is it important for you and the band to perform at Pride events or, like you did recently, at a club like G-A-Y in London?

In the world we live in now more than ever, it’s especially important that, like you said, our music can take you out of that. I think, what is a better time than now for everyone coming together and being stronger together, whatever your thoughts are on the election? It can be a heartache for some. I think for DNCE we try to bring some joy to you and happiness and share the love, and that’s what it’s all about for us. If we can put a smile on your face, that’s what’s important to us. And look, our gay fans are awesome and we want to give back in every way we can, so we’re putting on shows for them.

You can read the Q&A in its entirety on PrideSource.