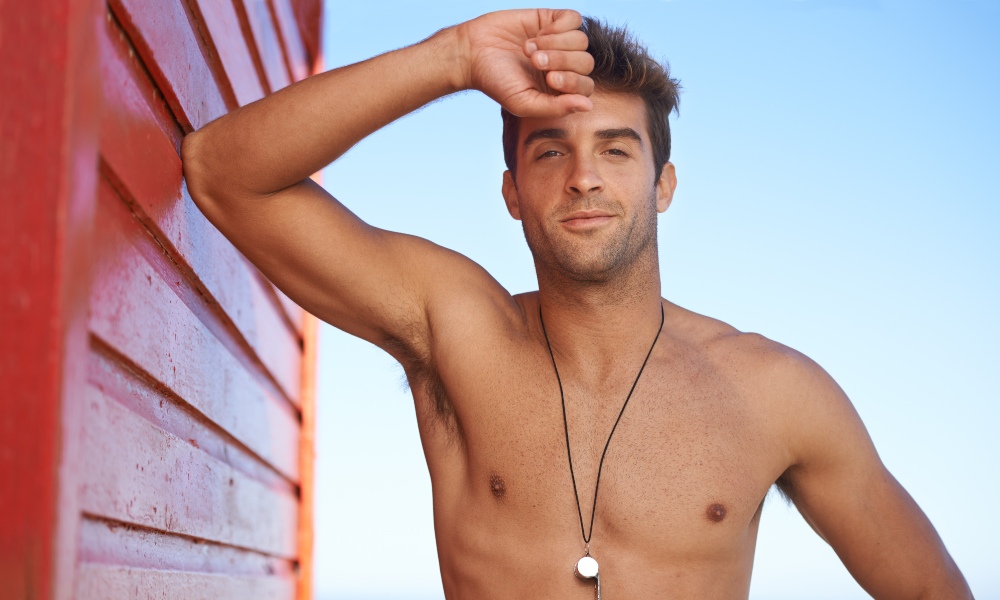 Who knows more about shrinkage than dudes whose job it is to jump into cold water without warning … and exit in front of a crowd?

Nothing is more perilous to being “poolside presentable” than cold water’s ability to shrivel up your penis like a startled snail retreating into its shell. Shrinkage has prevented countless men from not just partaking in cold-water skinny dips, but merely getting sack-deep in cold water alone.

This summer, let’s enjoy the beach by losing our debilitating fear of shrinkage. To that end, take some advice from the men who spend their lives heroically hurling themselves headfirst into shrinkage territory: Lifeguards.

Charlie B., former city pool lifeguard in Illinois: Compared to most places, the pool was probably the filthiest place I ever worked language-wise, so some guys would joke that they “were women” when the water was cold. One year, the suits we bought either did or didn’t have the inner-netting — I forget which, but it caused them to be extra-clingy. I do, though, remember being cautious to make sure I wasn’t getting out of the pool with the suit suctioned to my body since it left my bulge perfectly outlined. If I got out, and was aware I was clinging really bad, I grabbed the legs of the shorts and gave them a good jiggle so that everything came loose. Emphasis on awareness — in emergencies, you don’t think about it. That said, we definitely made fun of people who walked around unaware of their bulge.

Related | How to Get Hit on at the Gym

Riley Thompson, manager of the pool at the Mountain Home Air Force Base in Idaho: I’ve been a guard for 12 years, and no one I knew ever brought it up or was worried about shrinkage. It’s not something we worry about since we have no control over it, but also since most pools are kept pretty warm (our pool is an indoor pool kept at 85 degrees). The most we talk about is cutting the diaper out of our swim suits, which is that mesh liner they put in guard suits.

The biggest thing that was/is talked about among guards was, when you have to attach an AED [i.e., a defibrillator] to a female, you have to cut her suit, exposing the chest, to attach the AED pads properly. Fifteen-year-old boys tend to become uncomfortable, and I always tell them they have to be mature, especially because somebody’s life is on the line.

Related | 12 Things All Men Should Know About Their Balls

Joseph Baird, lifeguard in Prince Edward Island, Canada: I’ve been a lifeguard for around seven years now, from age 16 to 23. At the beginning I was a little self-conscious about my body, but as time went on, I learned not to worry. Being around both men and women of all body types in swimwear has taught me that there are some things that just tend to happen when playing in the water. I’d be surprised to hear about a male who didn’t experience shrinkage — in my mind, it’s something that happens to all of us, so there’s no reason to get caught up on it.

United States Lifesaving Association: One of our primary goals is to promote professionalism in lifeguarding. We don’t believe engaging in this discussion would further that goal or educate the public on a matter of importance.

This article was originally published on Dollar Shave Club. Read the original here.