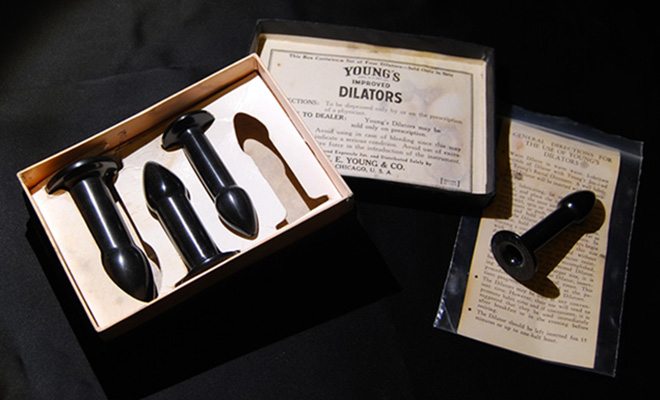 A Brief History of the ‘Healing’ Effects of Butt Plugs

Did you know that in the late 1800s, Americans commonly used butt plugs to cure acne and headaches? Ok, they weren’t called butt plugs: the device was marketed under the name “Dr. Young’s Ideal Rectal Dilators,” but they were basically butt plugs.

Our friends at PinkNews completed a thorough investigation of this odd “miracle cure” and they uncovered an undoubtedly queer moment in medical history.

Before 1962, sodomy was a felony in every state, so these “torpedolike” rods were used only for therapeutic purposes. Dr. Young’s Ideal Rectal Dilators were composed of a jelly-like material, and each set included four dilators, which gradually increased in size. Naturally, you would start with the dinkiest rod and work your way up to the big kahuna.

According to the marketing materials, the dilators “may be used by any intelligent person” as a cure for everyday ailments including constipation, headaches, and piles. However, “Dr. Young” claimed they could aid in the treatment of all sorts of things including mental disorders.

Related: How to Milk Your Prostate in 4 Simple Steps

In 1983, he contributed his findings to The Medical News praising rectal dilation as a cure for insanity. He claimed, “three-fourths of all the howling maniacs of the world [were curable] in a few weeks’ time by the application of orificial methods.”

In 1905, an advertisement for the product declared that “The best results may be obtained by the use of Young’s self-retaining rectal dilators. [The treatement] accomplishes for the invalid just what nature does daily for the healthy individual.”

Medical practitioners were told, “If you will prescribe a set of these dilators in some of your obstinate cases of Chronic Constipation you will find them necessary in every case of this kind.”

Related: 6 Things You Should Know About Prostate Massages

Dr. Young’s butt plug party lasted for more than fifty years, but in 1940, the United States Attorney for the Southern District of New York seized a shipment of the devices. They were inevitably labeled as misbranded and deemed “dangerous to health when used with the frequency and duration prescribed, recommended or suggested in the labeling.”

And, for those who needed a little extra stretching, “When ready to go to the next larger size, it is best first to use for a few minutes the same size you have been using, inserting and withdrawing It several times. This is very beneficial and should not be overlooked.”

Their examination concluded, “the rectal dilator would be dangerous to health when used with the frequency and duration prescribed, recommended, or suggested in the labeling.”

In the end, the FDA decided “[The advertisements] were false and misleading since it would not be efficacious for such purposes. On December 6, 1940, no claimant having appeared, judgments of condemnation were entered, and the products were ordered destroyed.”

If you’re bummed you never got to test Dr. Young’s Ideal Rectal Dilators, you can still order similar products on Amazon. In fact, if you order in the next hour, you can probably start “treatment” by the end of the day.

A Brief History of the ‘Healing’ Effects of Butt Plugs