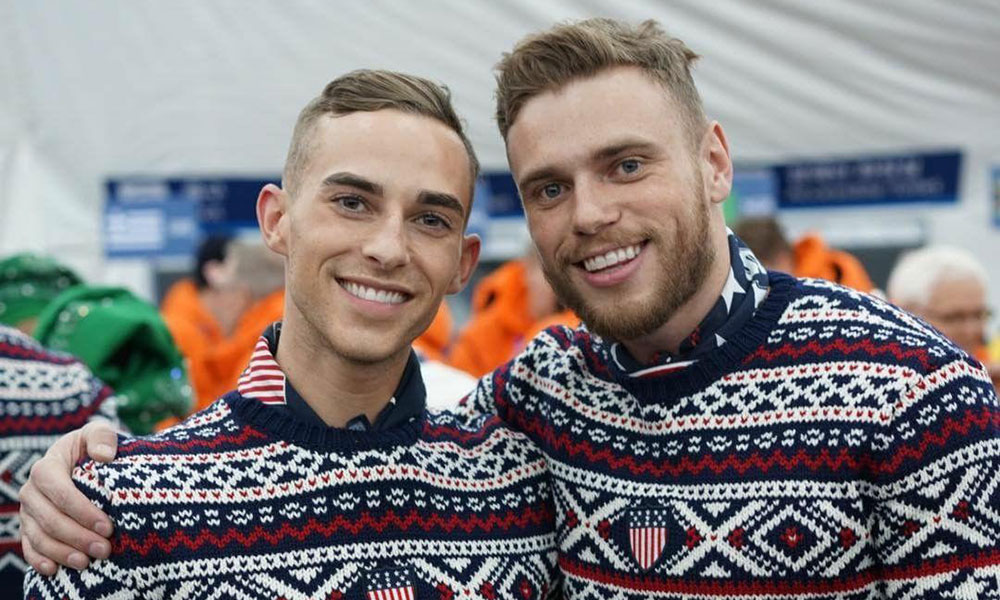 Gus Kenworthy and Adam Rippon kiss at the Olympics Opening Ceremony: “Eat Your Heart Out, Pence.”

Since then, the 28-year-old figure skater has spoken out against the Trump administration and scrutinized the choice of Vice President Mike Pence as one of the U.S. Olympic delegation’s leads. “I would absolutely not go out of my way to meet somebody [whom] I felt has gone out of their way to not only show that they aren’t a friend of a gay person but that they think that they’re sick,” Rippon told USA Today.

In 2014, after the Winter Games in Sochi Games, freeskier Gus Kenworthy came out as gay in a 2015 ESPN The Magazine cover story. (He qualified for PyeongChang a few weeks after Rippon.)

According to NBC Olympics, Kenworthy and Rippon are two of the three (the third being speed skater Brittany Bowe) openly LGBT members of Team USA who will be competing in Pyeongchang.

Related | Gus Kenworthy On Coming Out and Dick Pics

To show their Pride, Kenworthy and Rippon united during the Opening Ceremony to represent the LGBTQ community. On Twitter, Kenworthy shared three photos with Rippon, including one where he and Rippon share a kiss. The Tweet reads, “We’re here. We’re queer. Get used to it.”

Rippon also shared the photo on both his Twitter and Instagram, along with the Pride flag emoji (among others).

‪Tonight I walked in the #OpeningCeremony and got to watch my old friend @yunakim light the Olympic flame. Representing the USA is one of the greatest honors of my life and being able to do it as my authentic self makes it all so much sweeter ???️‍???❤️?